By Cassandra Lopez, Amily Tam, and Jaycie Tanaka
Panorama of Kawainui Park 1
Kawai Nui, located in the Kailua ahupuaʻa, is a place of rich history, containing artifacts and oral stories from long ago that portray the importance of this fishpond, especially for the those who live and have lived near Kawai Nui.
Kawai Nui is known as a significant natural resource to the Hawaiian islands. This vast marsh is located on the windward side of Oʻahu and spreads out below the hills. Kawai Nui, in pre-historic Hawaiian society, was known as Kawai Nui Loko menaing “the big freshwater fishpond.” Although it is maintained as a fishpond, it continues to exit as a marsh for its underlying water-retention properties (Drigot)4 . This area encompasses some of the oldest known Hawaiian agricultural sites and once supported one of the largest native Hawaiian settlements (“Aloha Aina”)11 . It can be concluded that Hawaiians were living in this area in the 1800s and even before then (Ewart)12 .

The Stories and Legends of Kawai nui 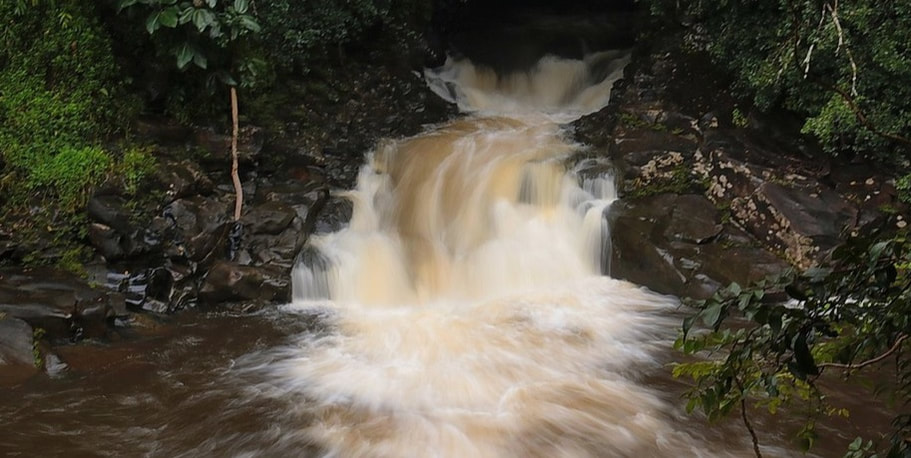 Kawai Nui Stream (3)
The Moʻo of Kawai Nui, Hauwahine
It is said that a moʻo called Hauwahine, inhabited Kawai Nui, who protected the health of the people who lived in Kailua. She assured the residents an abundance of fish as long as they took care of the fishpond. However, if they did not properly maintain Kawai Nui,  she would take away their food supply from the pond until they corrected their wrong doings. To the older residents who live in Kailua, they believe that Hauwahine had never left Kawai Nui; to them, she is seen as the guardian and protector of Kawai Nui fishpond and also of the Kailua residents (Drigot)4 . 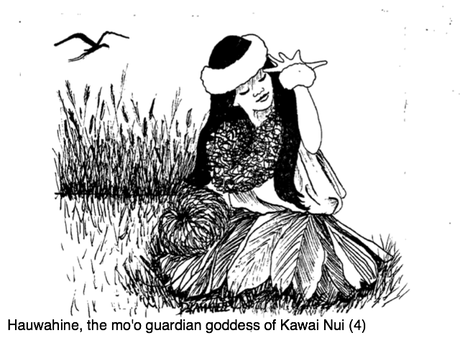 The moʻo of Hauwahine (4)
The Mākālei Tree
The Mākālei tree, like Hauwahine, is seen as a symbol of wealth for Kawai Nui. Because the Mākālei tree is a mythical fish-attracting  tree, it is responsible for the multitudes of fish that were once present at Kawai Nui. However, legends are not sure if the entire tree was actually located at a fixed location in Kawai Nui or if branches of the tree were spread throughout the Kailua ahupuaʻa (Drigot)4.
​However, a legend exists that explains how a branch of the Mākālei tree came to Kawai Nui in the first place. The legend goes as so:
One day, Kawai Nui started to grow agae due to the makaʻainana not taking care of the fishpond daily. The new konohiki (ruler) that came to Kailua pleaded for help that the residents who lived in Kailua ahupuaʻa clean the fishpond; those who volunteered at the clean-up would receive a gift of four fish to take home to their kupuna (elders). Among those who came to help was a young boy named Kahinihiniʻula, who lived with his great grandmother. However, because of his small stature, he was ignored by the konohiki and was not given any fish to take home.
​     After hearing this, Kahinihiniʻula's grandmother became very furious at the konohiki because of the lack of kōkua (cooperation) the konohiki showed towards her grandson. The next day of the pond clean-up, she gave Kahinihiniʻula a branch of the Mākālei tree and told him to show this branch to the fish in the pond, being that the branch was Haumeaʻs mythical branch. While holding this branch, all of the fish that were hiding in Kawai Nui started to follow him wherever he went, thus leaving no fish left in the pond! The konohiki realized that how he treated Kahinihiniʻula was wrong so he went to his house to apologize to him and the fish returned back to the pond ("Makalei Branch of Kawai Nui")5 .
Lepo ʻai (Edible Mud) of Kawai Nui
​     Lepo ʻai, also known as edible mud, is said to be only present at Kawai Nui. This rich (momona) mud was also eaten during ancient times by the people of Hawaiʻi people, along with Kamehameha I, when there was a shortage of kalo at Kawai Nui (Ulupō Heiau)6 . The origins of this special mud is said to have been brought by an aliʻi (chief) named Kauluakalana from the Pillars of Kahiki. According to Lahilahi Webb, there was a kapu regarding the gathering of lepo ʻai. When divers would go into Kawai Nui to search for the edible mud, "no one was allowed to utter a word while the diver was in the pond getting it. If a word was spoken, ordinary mud rose up around the diver and covered him so that he died. There was no escape" (De Silva)7 .
The Encounter of Hiʻiaka and Hauwahine
​     On Hiʻiaka's voyage to the country  in Kailua, she came upon Hauwahine who was bathing. Once Hauwahine noticed Hiʻiaka's presence, her bird flew into the sky and covered the sun completely, thus creating an eclipse (Fornander 343)8 .